I grew up in the wonderful era of digital watches - the 1970's, I remember my mother buying me a LED watch around 1976 for my birthday which I loved. Many of my classmates had them too and we would "show off" in the playground comparing their various functions and features.

I've always had a love of electronics and a liking for digital watches. Over the years I purchased many broken digital watches and tried to repair them. Some of the repairs were more successful than others, but the expensive luxury watches I couldn't repair forced me into a corner. I don't like to be beaten and like a challenge so I ended up learning how to develop my own watch modules. This is how Rawsar was born.

The Rawsar web-page was originally started in back in 2013. It was launched to offer my Chronosplit repair services to the world with a focus on my H1 repair module for the troublesome Chronosplit LCD watch.

I started the Rawsar venture from my home town of Chelmsford in the UK, but moved to Sydney, Australia in August 2016. Since then I have developed further repair options for the Heuer Chronosplit LCD-LED and Manhattan GMT.

If you haven't done so already, please look around my site and if you have any questions please drop me an email to support@rawsar.com.

From a very early age I was fascinated by by the magic of electronics - and I still am. Encouraged by my father who ran a successful TV repair shop. I spent many an hour building electronic projects, learning many skills along the way. My love for digital watches truly began whilst I was at school in the mid 70’s.  I managed to convince my mother to buy me a Trafalgar LED watch for my birthday. I was so proud of my LED watch and felt it was so different and far ahead of its time.

As the years progressed I, like many,  moved away from LED to LCD and then quartz analogue. However in the early 1990’s I decided I wanted something different, something that was unique.  This was the point where I thought I would revive my passion for digital watches, particularly LEDs. Now older and with more spending power I purchased a new old stock Pulsar sport LED watch.

The watch on the left is my 1st and much loved and worn Pulsar LED.

I wore this watch for 10+ years (and still own it) I loved it when people used to ask “How do you tell the time on it?”, I then would touch the sensor and it would light up the time in bright large red numerals. "There you go !" I would retort.

These days I proudly wear my Chronosplit R102.703 with a H1 module and bore my friends with the story of how I designed and made it.

Whilst still enjoying LED watches I wanted to push back the digits of time further and progressed to buying older high-end LED watch models, particularly Hamilton Pulsar. Working models in their boxes fetched large sums of money so I started purchasing broken models with the hope of repairing them.

I soon realised that repairing old digital watches was incredibly difficult however I discovered a German company who supplied replacement modules. I bought a couple of German SASM modules and brought two Pulsars back to life, this led me to think “if they can do it, so can I!". Now began my quest to make my own digital watch modules and learn all the skills required along the way.

In reality this is where my journey to repairing Heuer Chronosplit watches began. 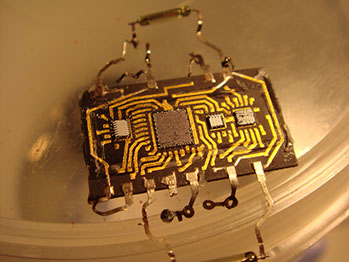 My plan was to repair the P4 gradually by successive prototyping whilst practicing programming along the way. I started with a strip board layout replicating the digital displays and DOW LEDs. Despite learning Z80 programming at college in the early 80s I wasn't very good at it, but practise makes perfect!

It took me around eight months to be proficient enough to write satisfactory computer code. I learnt how to create delays, multiplex displays, complex button sequences, lookup tables, how to divide to create seconds, minutes, hours, days, months. I also learnt how to debug my code.

In this image you can see my first module prototype. 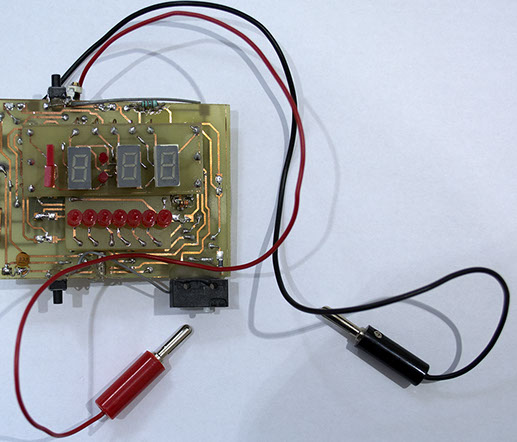 The next step was to acquaint myself with modern PCB design. I acquired a  PCB design package and practiced.  In my youth I learnt how to etch PCBs but used old-fashioned tapes and pens as probably digital watch manufacturers did. However working with a computer is much easier and more forgiving.

To check my PCB design would function I produced a larger home etched PCB. It worked well albeit my relatives used to call it the "Elephant" watch. 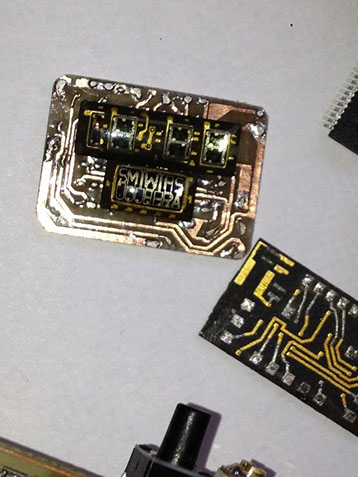 Once I had polished the code and the design the next challenge was to miniaturise. My first attempt was to try to simply scale down my home PCB development work. This I found very difficult and unreliable, as the PCB tracks were so narrow, and simply not robust enough.

In this picture you can see my home etched prototype on the left and original Pulsar PCB on the right. 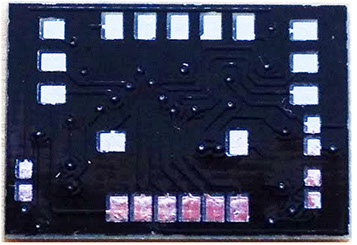 The next step was to approach a PCB production company.

I found many but looked at the reviews and sent my order out to a Chinese company. They were very helpful, and patient with my early amateur attempts . After a few corrections coupled with my utter determination I now had working code and good quality PCBs. 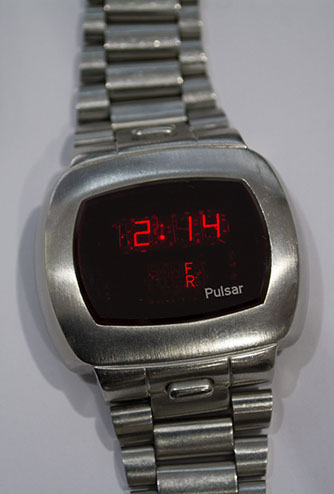 Armed with professional built PCBs all that was needed was simple assembly work !.

Well I say simple. I quickly learnt working on micro electronics requires magnification. I tried reading glasses and jewellers loupes but settled for a very useful x20 magnification stereo microscope, one of my best investments along with a high quality soldering iron.

I had much fun getting the "flick wrist" feature to work but understanding how to code helped greatly in this regard. 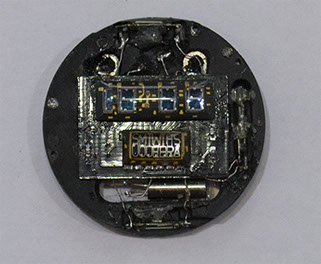 I had reached a point where I had learnt how to code and produce replacement digital watch modules and decided to look farther afield. I was getting "brave" and noticed a 70s Reihl Sunwatch for sale on eBay, it was being sold as a "kit" of parts. The kit included a number of old Reihl modules, case, strap, new solar cell etc.

I tried hard but even with my skills I could not make any of the modules to work. I did manage to salvage enough parts including a display to create another module. The Sunwatch lived again. 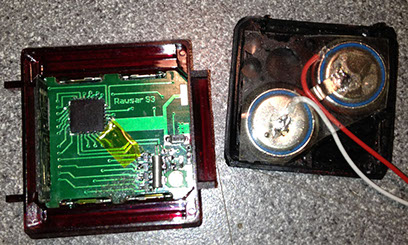 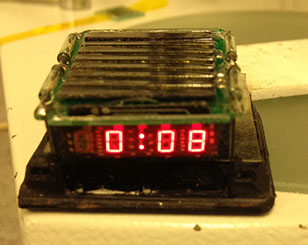 Buying old digital watches became an opportunistic hobby for me. I would  wait for a a good deal on a broken digital watch, buy it and try and repair it knowing I could always create a module if I could salvage at least the display. This led me to look for my next challenge, when I came across an auction for a Heuer Chronosplit LCD/LCD watch with a spare calibre 102 module, I won the auction. Now could I make a good module out of the two? In short no - but I soon learned why!

I had read numerous articles online on the poor quality of Chronosplit LCD modules and thought to myself wouldn’t it be great if I could repair the ill fated Chronosplut (As they are often affectionately known). 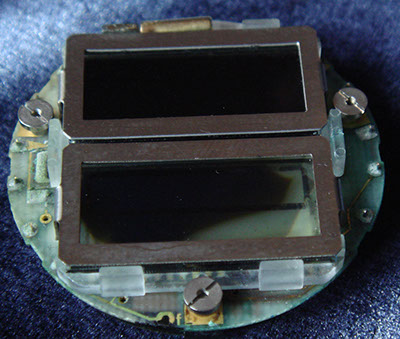 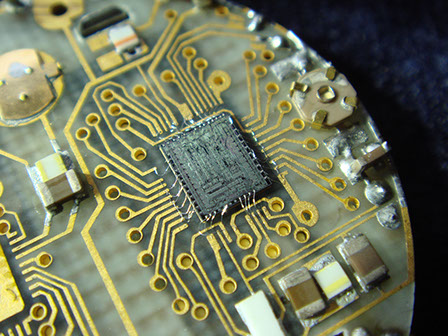 The pictures above illustrate a typical broken Calibre 102 module. The damage is normally caused by battery leakage (note the green corrosion) which attacks the seals on the LCD displays and also disintegrates the wire bonds. The wire bonds are incredibly delicate too and the inexperienced can do much more damage as seen above.

One of the most difficult parts of redeveloping the Heuer Chronosplit was replacing the LCD displays. I approached one of the few experts around with the aim of buying some old original displays but was told that none were available.

It seemed my only option was to go down the custom LCD re-manufacturing route. I shopped around sending out emails all around the world to different LCD suppliers but I was getting ridiculously large minimum quantity requirements with silly associated costs.

I’m told I have a very determined personality coupled with a bit of OCD so I just persevered until I found a supplier that would manufacture lower quantities.  I spent a fair amount of time measuring the old Heuer displays, as I really had to get it correct. 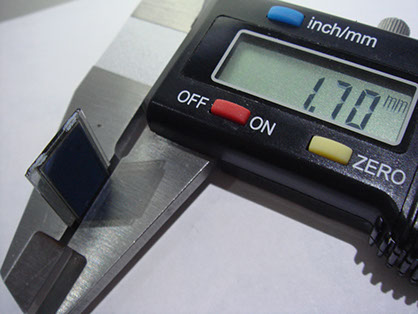 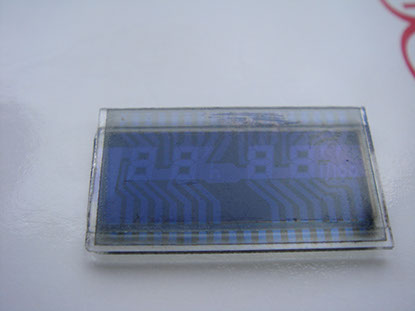 My aim was to re create a LCD display that could be used as a direct drop in replacement for the original watches and for  my Rawsar H1 module. I later used this feature to repair a Ford Split Lap Unit 77 this which can be seen here.

I put my OCD qualities to good effect by very accurately reverse engineering the old displays.

I entered into a fair amount of conversations with a LCD supplier going back and forth to get the specification correct for both the top and bottom displays. I also negotiated price, quantity and new zebra conductive strips again to the same specification as the originals. 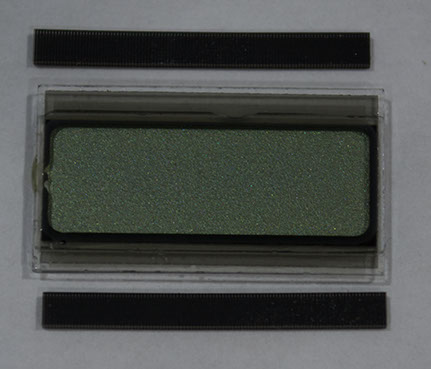 A few months passed and after a number of iterations and a bit of persuasion with the supplier I received samples .

I carefully checked the samples and all seemed good but I did not want to proceed with full manufacture until I had designed and produced the H1 module, the pressure was on.

Although I had successfully designed PCBs for my earlier Pulsar and Reihl replacement modules; this was much more challenging as there are many more tiny PCB tracks crammed into a very small space. I also needed to ensure that the minuscule  LCD contacts line up accurately as did the buttons, battery holder, bulbs, clips and alignment holes; it proved to be difficult.

Fortunately modern computer-based PCB software helped me to overcome the issues above by allowing me to adopt a four layer design instead of the original two layer Heuer design. In the 1970’s this would have been done on a drawing board and using primitive photo etching techniques, which I find amazing. 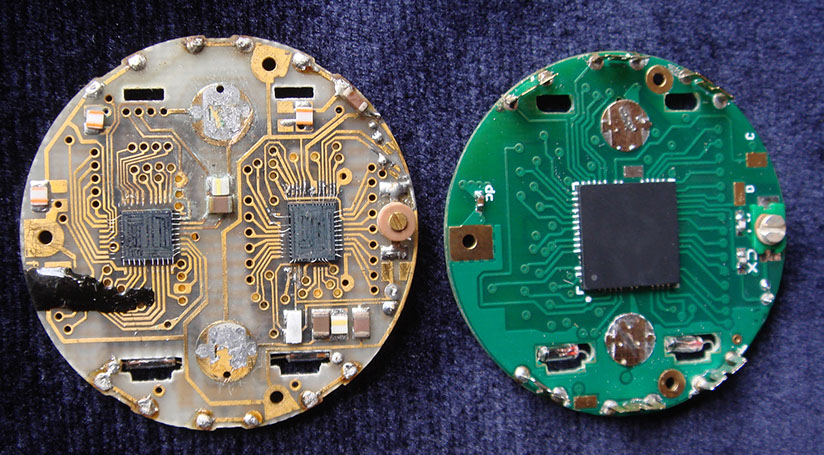 I spent around three months and many a sleepless nights writing code in my head instead of counting sheep, I would count bits and bytes and think about sub routines. To save time and unnecessary effort in building a large prototype I converted the spare module I purchased from eBay into a small prototype to test my code..

When I eventually succeeded I was absolutely delighted. I had learnt so much along the way and ultimately had managed to bring back another classic vintage watch back to life.

This was indeed the start of Rawsar. 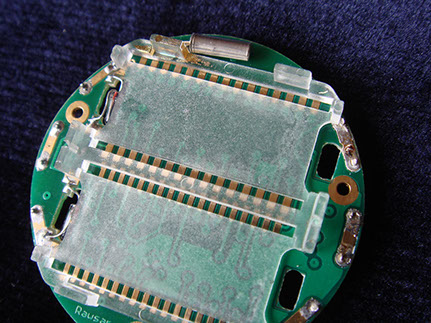 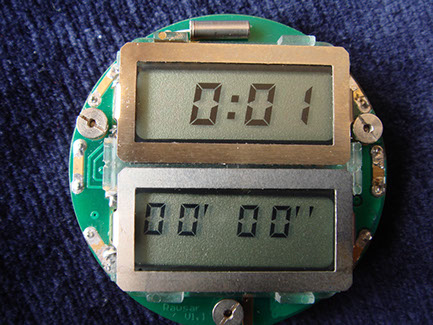